The day has come for us to tattoo our wedding band to enhance their uniqueness and identity each individual ring to CF and Gary!!!! Align to our notion of not getting just a classic design ring, we decided that a classic profession of love is somewhat common and simply not enough to satisfy the twisted side of our hearts. Hence, we agreed on the following words:

His: Property of CF

Her: Property of GO

This could also serves as a little reminder when we try to take it off….keke. We faithfully went back to the same Lee Hwa branch we bought the rings from, for the engraving. One of the staff quickly attended to us and I quickly reminded him just to be safe that complimentary engraving was promised (Engraving at Love & Co is payable even if the rings are purchase from them but theirs is laser engraving which provides a much wider options including engraving of your spouse fingerprints!) Unfortunately, in the real world we pay for what we get and the staff took out an ancient looking engraving tool which kind of shaken my confidence as the tool is operated manually (and I thought everything is computerized nowadays). However, the results turn out to be surprising satisfactory. 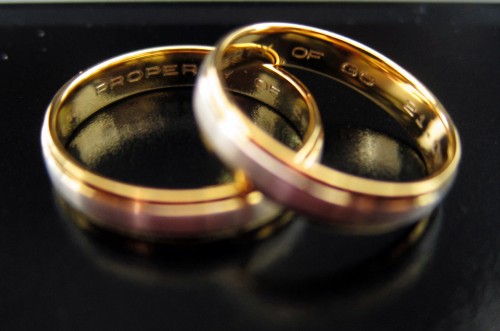 The engraving process is fast with an estimated time of 8 minutes per ring which we remarked it quite loud. The staff perform the engraving (Yes, apparently their sales personnel has multi-functional role as well! No different from any job in Sg – LOL) clarified to us that he is the best among the staffs. In my mind, I was hoping it was because he had lots of practices from a roaring business rather than killing time in the store…haha.

After the engraving, we noticed that there is ample blank space and wasted no time to include our most important date for the year..yippy!!! I jokingly informed CF that in the event we forgot our anniversary date we can always refer to the ring, which she responded with rolling of her eyes :p The staff was amused when he saw the date as it coincides with his bday. Hopefully its great sign that fate is smiling on us in our new chapter of life =) 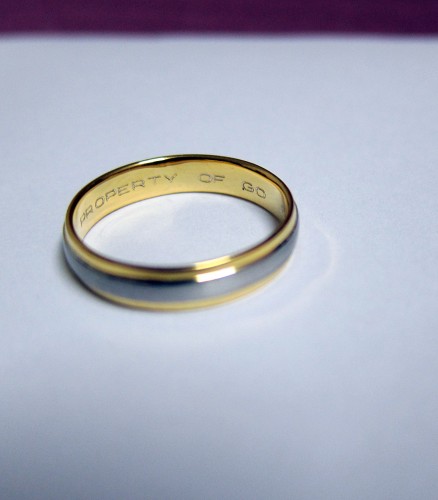 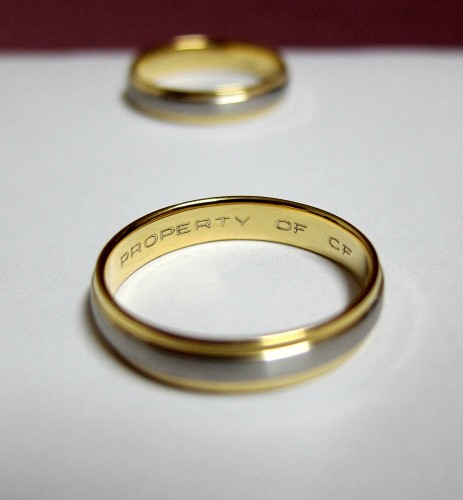 Some background of the wedding band which I read online – The idea of the wedding ring originated from Europe and had spread to all parts of the world. Initially the ring is given as part of the betrothal gift but this culture had evolved through time to symbolize love and the ring exchange has become a critical part of a wedding ceremony.

Nevertheless, I sincerely wish that we can continue to be ever blissful and loving in our relationship. To support when one is feeling down. To understand when one makes mistake. To continue to communicate and learn to adapt to each other when staying under one roof. Hopefully, its our love that symbolize the wedding ring rather than the other way round!!! Love you  ^ ^ 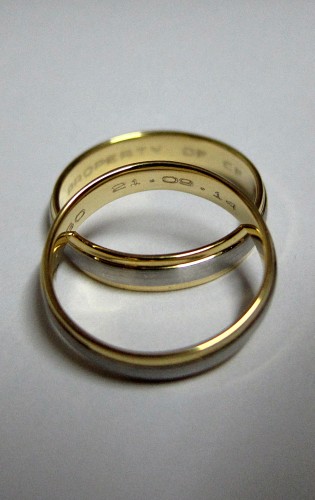